Why the “Virginia Way” Should Mean Action on Climate Change

It should come as little surprise that the National Resource Defense Council (NRDC) has rated the Commonwealth of Virginia among the nation’s least-prepared states for water-related climate change threats. After all, Attorney General Ken Cuccinelli has adamantly denied that climate change is seriously affecting our state’s environment.

In their report entitled “Ready or Not”, the NRDC evaluated whether states were prepared for and cognizant of climate change based on a combination of state action and actual state climate conditions. The report focused specifically on  water supply levels, precipitation levels, sea level concerns, saltwater intrusion, species impact, and erosion. In their analysis, the study divided states into four categories:

Sadly, Virginia, along with 17 other states, was graded into category three. And it appears little will change until the current state government considers the environment a substantive issue. In fact, Ben Chou, policy analyst for the NRDC, remarked that Virginia ranked poorly because it “had not done anything comprehensive at the state level…[and that] there won’t be a lot of action on the issue until it becomes a priority of the governor.”

So, while the ranking should come as no surprise, that fact that Virginia lacks a comprehensive adaption plan to address water-related climate change is a serious reason to worry. According to Steve Fleischli, director of the Water & Climate program at the NRDC, “The commonwealth of Virginia could lose $45 billion dollars and over 300,000 jobs by 2050 because of impacts on water availability alone in the state.”

He goes on to add that the Hampton Roads area, while has addressed sea-level rise at the regional level, is still ranked 10th in the world for assets at risk due to sea-level change. To put things in better perspective, the NRDC found that a relative sea-level rise of 2 feet, entirely likely over the next 50 years given melting ice sheets and land subsidence, would make over 740 square miles, including 170 miles of major roadways and 35% of total port land area, vulnerable to permanent flooding.

While certainly Virginia’s localities can take the lead and implement climate change policies of their own, as is the case with Norfolk’s extensive plan to address sea-level rise, unless there is a unified, concerted effort by the entire state little can be done. This is especially true given that our waterways and watersheds extend through the entire state.(As seen in the diagram, the Chesapeake Bay watershed stretches into the Appalachian Mountains.﻿﻿﻿) 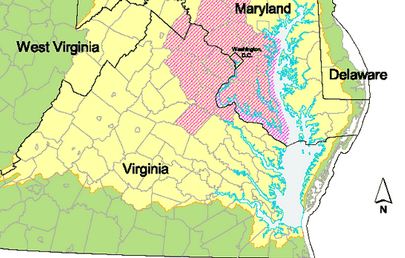 Yet it is not just the state-specific impact that should give our government reason to implement a comprehensive response plan. The Defense Department, which has a large presence throughout the state, identified climate change and energy security as serious concerns. The Pentagon even named climate change, the very concept our Attorney General refuses to acknowledge, as an “accelerant of instability and conflict” and has issued a preparation plan of their own.

If the military has acknowledged, made, and carried out plans to address climate change, why has our state government not?

To many, including myself, the “Virginia Way” is to foresee a problem and address it before it causes irreparable damage to our communities and economy.  If we all acknowledge the severity of climate change and act accordingly, only then can we say we’re truly governing in the “Virginia Way”?